Checking in on Dirty Old Sneakers

Running Expert and Coach at Runningbrina

Especially during times like this, the running community is more valuable than ever for me which is why I sat down (virtually) with Eric (Dirty Old Sneakers) to discuss new goals, fears and how to adjust to a time where people have to keep a 6 feet distance.

I asked Eric, who on his social channels (check out his amazing YouTube Channel) discusses everything running, cycling and (rarely)  swimming. From technology and music to nutrition and training to finding the perfect shoe for you. He helps to find the right group to work out with every week or even the motivation to do so. I personally love his reviews of races and marathons he does. Eric is also from New York City and shares his thoughts on how his life has changed the past weeks. 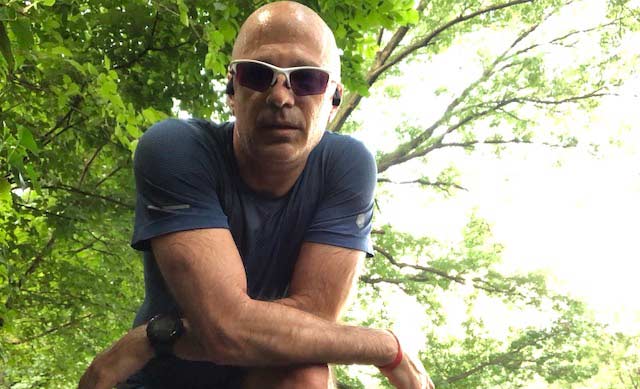 What has changed for you since mid-March?

What hasn’t changed? When talk that NYC was going to get hit hardest, I moved my family up to Westchester to live with family. We’re still up here — going on four weeks and well, it’s just confirmed for me that I’m a city kid at heart.

The strangest part of exercising up here is that I need to drive to places that I’m going to run. It seems counterintuitive to me that I would get in a car to go someplace to then get out and run, and then back into the car (all sweaty and smelly) and drive back to the house I’m staying in to shower, etc. But I guess this is what most people deal with, it’s just new (and still strange) to me.

How does training look for you right now?

Training hasn’t been great these past few weeks. I tweaked my back again a few weeks ago and had to take some time off, and only got back out there to run this morning. It felt amazing and awful all at the same time, know what I mean?

We went into quarantine just about a week before the NYC Half was supposed to take place. I’m not going to tell you that I was ready to run a PR for a half, but I was in decent shape and I was looking forward to the race. And then, when it was canceled, I think it really hit home for me how bad things were going to get. And while I tried to maintain a solid base, if I were to be 100% honest, I think I probably fell into a bit of a depression, which ultimately led to another injury.

As I said before, I have just gotten back to it and I’m feeling pretty strong. I’ve been doing a TON of stretching and have started doing Yoga again which has been great for my back and to help manage the stress.

Also, I was smart enough to pack up and bring my bike with me when we came up to Westchester. That said, I wasn’t smart enough to bring cold weather riding clothes so I’m going to have to wait until it warms up a bit before I get back in the saddle.

Do you feel safe running outside?

I’m glad you asked this question. I don’t fully feel safe running outside these days. As I mentioned, I’m up in Westchester now and I thought since I was in an area that was more sparsely populated than Manhattan, that maybe it would be easier to run and still be physically distant from people. And for the first few runs, it was.

But then on one of those random warm days, I hopped in the car and went to the park I had been running in and when I pulled in, I noticed people on the trails who were walking three and four abreast and well, I’m not ready to compromise my or my family’s health for a run. Now that I’m back at it, I’m planning to go super early before everyone wakes up.

Have your goals shifted or are they still the same?

Goals, ha! My main goal right now is to run off all the weight I’ve packed on by panic eating.

Can you see something positive coming out of this crisis?

I think more people have gotten into running and exercising which is always a good thing (although, maybe that will make popular races even HARDER to get into).

Do you workout at home, if so, what do you do?

I do, as I mentioned, I’ve been doing Yoga. I’ve also been doing isometrics, lots of core work and push-ups. I’ve never had a lot of upper body strength, and I’m pretty proud to say I can do 50 push-ups at a sitting these days.

How will life look for in the future?

I honestly don’t know. At this point, I’m still taking things day-to-day. My day job is in communications with a not-for-profit and one of my expertise is crisis communications and crisis management so I’ve been busier than most as of late. Don’t get me wrong, I’m not complaining (too much), I know a lot of folks are out of work and I’m thankful that I still have a job and that it’s pretty secure, but I look forward to things slowing down, moving back into my apartment and seeing and running with friends.

Thinking about upcoming races that I’m signed up for – like the 50th Anniversary of the NYC Marathon, will I feel safe lining up at the Verrazano Narrows Bridge with 50,000 of my closest friends in November?

I have no idea.

Running Expert and Coach at Runningbrina